GÉOTEC GROUP is a geotechnical and environmental consulting and engineering office that provides advisory services to all actors in the construction chain: Owners, both public and private Investors, Developers, Contractors, Qualiy Control Offices, Experts.

GÉOTEC was created in 1973 by François BARNOUD. It is now renowned nationwide for its highly technical competencies both in soil and rock mechanics, environment, and project engineering.

There are now 530 people working at GEOTEC, including 180 engineers and executive technicians in 4 Regional Agencies and more than 20 offices that support the sustained growth of the top independent geotechnics firm in France (the founding family is the majority shareholder).

GÉOTEC's 4 laboratories in Dijon, Bordeaux, Paris and Lyon can run all types of tests, while the Group's 80 drilling teams are equipped to carry out investigations as deep as 150 m.

The Goup's finances are robust, with a consolidated turnover of an estimated €55M 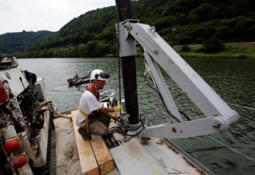